The internal structure or material of film is taken up in the film and sculptural installation, Film, which derives from film-material found on the Internet: a few aberrant frames from an abandoned home-movie purchased on e-Bay become the basis of the work. Old and new technologies come together in Film where the flickering cone of light that normally dances across the projection screen is here transformed into a stream of celluloid flowing across the computer screen. The plasticity of the filmstrip degenerates and images blur into abstraction leaving only its auratic trail behind.

Borrowing ‘expanded cinema’ practices, Film’s display is situated away from the projected screen. Instead, Film points to pre-cinema technology by being housed within a contemporary version of Thomas Edison’s Kinetoscope(1) that restricts the viewing experience to the singular and requests a more embodied interaction with the work. In doing so the installation offers a relationship between time, tense and duration while suggesting a past that is both visible and invisible, and both material and imagined. 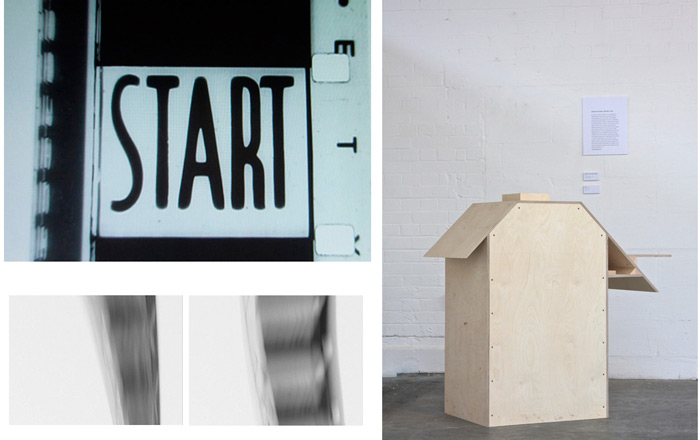 ———
(1) The kinetoscope (1887 c.) was an optical device that limited cinematic spectatorship to a single person activity (something that stands in stark contrast to the ‘mass’ media tendencies today) by requiring the viewer to bend over and look in on the image through a small aperture.